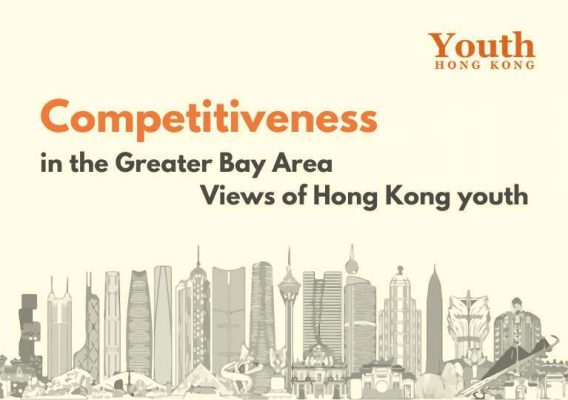 This study, based on literature reviewed by international bodies, asked 720 Hong Kong tertiary students in Year 3 or higher. They had already shown interest in developing careers in the GBA. A framework of employability skills for the GBA with 13 factors was created as part of the study as is shown above.

Self-assessment of factors contributing to confidence and competitiveness was a metric used in the study. Various abilities for career- building in the nine mainland GBA municipalities were rated on a 0-10 scale, where 10 indicated the greatest confidence. It was concluded that overall confidence in competitiveness was between 8.38 and 6.17. Findings can be found in Figure 2.

79.7% of the student respondents agreed that “the outlook for a business startup in the GBA was positive” whereas 90.1% agreed that gaining a scholarship or seed funding would be helpful when deciding whether to make a move. Internship and employment opportunities as well as a one-stop online platform providing information about studying, working, starting a business and living in the GBA was also desirable.

The most attractive work location for 52.5% of respondents was Shenzhen, followed by Guangzhou which was the top choice of 19.4%, although 11% of respondents said it was hard to assess attractiveness of the various cities. Other challenges remain with 70.9% of Hong Kong youth actually unaware of the opportunities in the GBA and many have misgivings about the social system they might face. Figures 3 and 4 have details.

When asked about how they might best prepare themselves for pursuing opportunities in the GBA, 63.9% of respondents expressed willingness to join work experience or internship programmes. 51.4% were willing to learn more about the GBA industrial sector outlook and 41.3% chose taking part in activities such as workshops or GBA knowledge exchange programmes as ways to boost their confidence.

26 youth who were studying, working or trying to set up a business in the GBA were also interviewed. They agreed that having first-hand experience of local life and culture had helped them to make clearer decisions, with those who had had to extend their stay due to the pandemic saying this had allowed them to gain a deeper understanding of the area since they had been unable to return home as often as they would normally.

Comments on the study were also received from 16 experts in the GBA including academics and employers. They noted that Hong Kong youth’s comparatively strong English language skills coupled with global perspective could help raise the quality of services provided by mainland enterprises and open the door to international markets. Nevertheless, ability in English was not among the top abilities according to self-assessment. (See Figure 1.) Experts also noted that young Hongkongers could offer relatively more work experience in urban management and professional services in the GBA.

Nevertheless, competition amongst talented young professionals is getting fiercer in the GBA. Therefore, improving competitiveness is a prerequisite if Hong Kong youth are to increase their chances of being hired. In addition to certain misconceptions about pursuing careers in mainland China, local youth do not always have appropriate practical operational skills or an adequate understanding of urban planning policies and industry prospects currently existing in the GBA. Inevitably, these shortcomings could exacerbate limitations on career growth and experts advised young people who are willing to work in the GBA to target industries and cities that suit them personally before building up experience that could help advance their trajectory on a career pathway.

Other recommendations included opening up more opportunities for internships, as well as considering job rotations between the GBA cities to strengthen young people’s practical professional skills, facilitate talent mobility and increase competitiveness. The report also recommended building online learning platforms to cover skill sets and personality traits useful for the GBA employment (see Figure 1). In the long run, any qualifications obtained on such a platform should have mutual recognition by authorities and employers in Hong Kong and the GBA to ensure quality control and a level playing field.

The study also suggested the need to integrate the concept of career pathways in the GBA in life planning education for secondary students in Hong Kong. This would support government subsidies for organizations participating in schemes such as the “GBA Career Exploration Scheme”. Through company and factory visits, alongside job shadowing, youth could also learn more about emerging opportunities in the GBA.