Changing times, changing prospects. study and work in the GBA 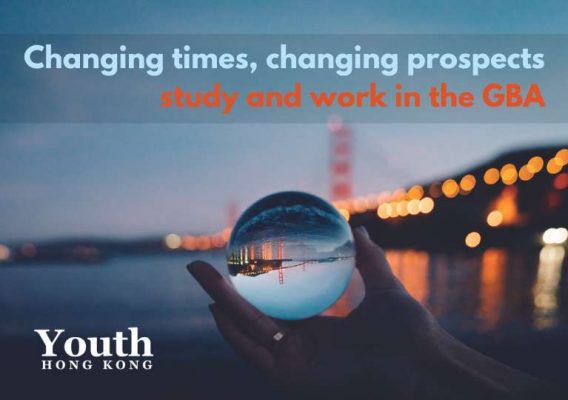 As the generation that grew up through turbulent times in Hong Kong comes of age, policymakers are urging young people to seriously consider being prepared to relocate to mainland China for study or work. How realistic is this at a time when many of their mainland counterparts aged 16-24 are faced with unemployment? Running at 18% in April – the jobless rate for youth there is at its highest since official records began. Many mainland say “bai lan.” In other words, why not stay at home and watch TV all day.

This matches the concept of 「lying flat」 or adopting a low profile if you have little choice rather than struggling to survive in a highly competitive rat-race. Not only privileged youth but a quarter of young people from low-income Hong Kong families have reached the same conclusion to a recent survey by the Society for Community Organisation. Youth’s response has been criticized by Hong Kong’s education authorities but HKFYG surveys last year showed that work-life balance was a top factor when choosing where to live and work.

Federation surveys last year also explored similar topics and were reported in the June and September issues of this magazine. Let’s look now at what the other surveys say.

The Hok Yau Club – an NGO, Hong Kong Baptist University, and MWYO – a think tank, have all recently published figures that reflect an uptick in interest in studying, being an intern or working in mainland China, including the Greater Bay Area (GBA). Retrospective figures can also be found in the March 2015 issue of Youth Hong Kong.

For a snapshot of interest since 2018, there are regular Hok Yau Club surveys which usually have a sample of about 2,000 students.

A survey undertaken last year by the Hong Kong Baptist University found that among 2,000 young Hongkongers aged 21-40, nearly half of whom had a university degree, considered the government’s Greater Bay Area Youth Employment Scheme to be unattractive. The majority thought that the educational requirements of the scheme should be relaxed.

Instead of getting a job, more students wanted to go on work visits or internships in the bay area rather than moving to live there. Nearly half realized that understanding the mainland China market would be an advantage for future careers, but still had major concerns about adapting to mainland work culture, policies and regulations.

Look for the upside

In December last year, a MWYO survey found that 12.5% of the 1,002 respondents aged 18-34 were interested in taking full-time jobs in the GBA, a slight drop from 13.4% in a similar survey two years previously.

For the majority not interested in moving, nearly half cited personal reasons, including their lack of fluency in Mandarin and having to look after family members at home. Negative perceptions of the mainland were a key factor that put off young people too such as:

Nevertheless, researchers say there were still 180,000 young people willing to move, and more were actively seeking information and jobs.

The MWYO think tank has also been involved in a longitudinal impact study to assess the effectiveness of the Greater Bay Area Youth Employment Scheme. The study was in collaboration with the Hong Kong General Chamber of Commerce and included online surveys and in-depth interviews and the aim was to understand the views, expectations and difficulties encountered by both employers and employees taking part in the scheme.

Most employers interviewed in the study complained about difficulties in administrative and human resource matters related to the government scheme even though they learned more about the skills of newly hired graduates.

The central government recently announced a major stimulus package to shore up the economy. It included offering companies subsidies for hiring fresh graduates who will enter the job market in record numbers this year. The Shenzhen Government website was upbeat, saying that the city had “attracted some 229,100 talents and accepted 90,300 fresh graduates.” Shenzhen is the city of choice for many young professionals. Nevertheless, the economic slowdown is severe and economists remain cautious. It can be expected that young people will feel the same.

*Hong Kong students can apply directly to eligible mainland universities based on their DSE exam results. Compared to the millions of mainland students who need to compete through the National College Entrance Examination, being able to apply directly based on DSE exam results is an easier path to university, signifying preferential treatment towards Hong Kong students.