Every day of our lives 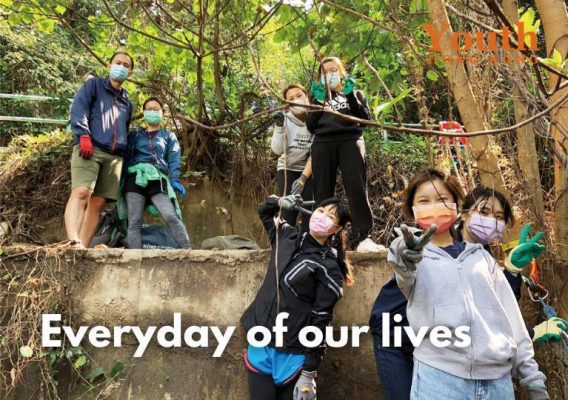 Volunteering for the sake of the environment is new to me. I learnt why our water quality is so bad and found out how people are threatening marine life. I even signed an agreement never to eat tuna or sharks’ fin, but it wasn’t till much later that I became an environmental volunteer.

Hongkongers aren’t aware of the problems. My family, for instance. They like the convenience of disposable straws and takeaway meals in plastic boxes. They think they are more hygienic and don’t understand about recycling. I try to explain how it’s done in Taiwan, South Korea and Singapore but I haven’t made much progress yet. Step by step. I began to volunteer with HKFYG this year, first delivering free meals to elderly people living alone and then doing a coastal clean-up project on Lamma Island. We went to a beach that we could see clearly from the ferry. It was covered with rubbish. A real eye-sore. To get to it, we had to abseil down a cliff.

I was shocked at the amount of garbage. Such damage to the marine environment and destruction of beautiful scenery. There was even a water-logged sofa. We volunteers split up into teams with bags to collect and sort the garbage into different categories like polystyrene, plastic and glass. According to our expedition leader, the beach had already been cleaned up by volunteers twice. It made me so sad. It was beyond imagining.

As the coastline was difficult to get to, we had to form a human chain to transport all the garbage bags to a refuse collection point. It was exhausting work and took many hours.

I am not an experienced environmentalist but I strongly believe in the importance of getting young people to join in such work. The quantity of tiny pieces of garbage, as well as big ones, was astonishing. Youth will never know how serious the problem is if they do not join a coastline clean-up action like this.

We are recruiting now for more volunteers through Instagram and many of my friends are interested. Although I am not so active on social media, I think all of us will volunteer regularly in future, as well as making more serious efforts to reduce pollution in all possible ways, every day of our lives. We should fight for sustainability. If we don’t, our generation and all those that follow will suffer.