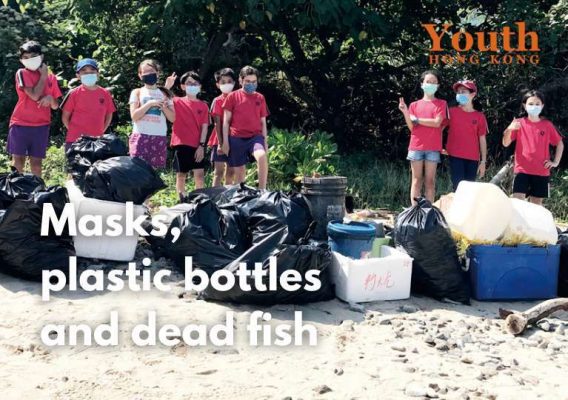 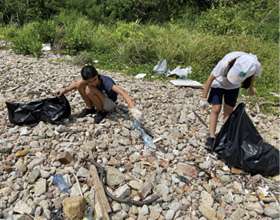 “There are many broken bits of glass worn smooth by the sea” says Antonia. Styrofoam and plastic boxes, cutlery, plastic straws, ropes, fishing tackle, Tetrapacks and snack packages, adds Kate, “…and barrels of what looks like dirty oil, lorry tires and wooden pallets.”

What makes them volunteer for this dirty job and what do they do with all this mess?

“If we clean up the rubbish, the next generation has a chance of living in a less polluted world,” says Antonia. “We sort it into big rubbish bags at places like Sandy Bay in Pokfulam, Cyberport and on Lamma Island. Just once, a boat came to the beach and offered to collect our bags so we did not have to carry them out to the rubbish collection point,” Kate remembers.

“We can do something about it immediately and make a positive difference,” says JC. “I have written a letter to Coca Cola telling them that they should change all their packaging.” Sasha, Antonia and JC agree that Hong Kong’s biggest threat is global warming. “Every hour we are making the Earth hotter and if this continues, we will die,”says JC.

“We have been going to beaches near home and school to clean up and when we go camping, we reduce waste as much as possible.” They take reusable utensils, plates and bottles and snacks like bananas and oranges. Unused food goes back to school to make compost. Unopened bags of food are donated to food banks and charities. “We take water in 5-gallon containers that can be refilled and work with the campsite to organize rubbish collections when we leave,” says Kate.

Cleaning up also stops rubbish clogging up drains and waterways, the children point out. “We want beaches that don’t smell and where dogs don’t eat rubbish that makes them ill,” Kate continues, saying that polystyrene is the worst. “It breaks up into small bits that get eaten by fish and other marine creatures. They think it is food. Then we eat the fish which means we eat polystyrene too!”

“I think masks are now probably the main problem for Hong Kong,” says Ian. “Everybody wears them and people aren’t responsible enough to put them in garbage bins properly. They end up being blown around and ending the lives of poor animals. If we don’t do anything, it will just get worse and our beaches will become landfills.”