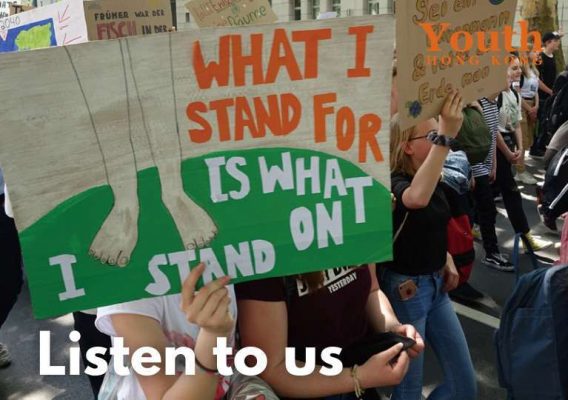 Climate change is undeniable and people who are young today will face some of its worst effects. Last year’s fall in greenhouse gas emissions worldwide, caused by the pandemic, are likely to be short-lived. Just this year, May saw the highest temperatures on record for Hong Kong. Understandably, they are key actors in raising awareness. They address issues such air pollution, fossil fuels, extreme weather, garbage strewn beaches and overflowing landfills, rising mean sea levels and the risks posed by coastal flooding. Their efforts are seen in the work of numerous environment-related NGOs and the Local Conference of Youth (LCOY)* which shares the outcome of annual climate negotiations about renewable sources and carbon neutrality.

On platforms such as LCOY, youth try to align their efforts with those of the government. As Hong Kong’s Secretary for the Environment, Mr Wong Kamsing, says, “Decarbonization is closely linked to all the [government’s] efforts …, such as our energy source and power saving, transportation and transition to electric vehicles and waste reduction. These three areas contribute more than 90% of Hong Kong’s carbon emissions.”1

Power generation contributes up to 70% of the city’s annual carbon emissions. A large portion of this pollution comes from coal-fired power stations and vehicular traffic, including shipping. Renewable energy sources at present meet only 0.2% of the city’s total electricity supply. There is just one wind generator on Lamma Island and a pilot project stage using floating solar panels in reservoirs generates only enough electricity to power 36 average households for a Nonetheless, an ambitious carbon footprint reduction target of 65% to 70% by 2030, using 2005 as the base, has been set by the government.4

Transportation Public transport is a Hong Kong success story but there is no overall target for reducing the number vehicles on the roads, nor for encouraging cycling as transport. Yet, at 275 vehicles per kilometer of road, Hong Kong has among the highest density of traffic in the world5 and ozone levels have nearly doubled in the past 21 years.6 Ozone is formed when nitrogen oxide, emitted by vehicles, and volatile organic compounds (VOCs), emitted from such sources as paints, solvents and cosmetics, react with sunlight and oxygen. This causes harmful smog that can lead to high levels of respiratory disease. Petrol-powered private cars are to be phased out by 2035 and the push to promote expensive electric vehicles is part of Hong Kong’s ambitious goal of carbon neutrality by 2050.7 However, according to the 2020 air quality monitoring results, commercial vehicles including trucks and franchised buses account for more than 90% of highly polluting nitrogen oxide and as of March 2021, electric vehicles made up only about 2.1% of the total.8

Light pollution is another serious problem but again there is no plan for legislation to counter it. The University of Hong Kong’s Department of Physics took measurements from a number of locations in Hong Kong and found that the highest level of light pollution was in Tsim Sha Tsui, at 1,000 times brighter an average than the benchmark of a “normal” night sky: the worst reading in the world.9 Mong Kok, Tsim Sha Tsui and Causeway Bay suffer worst.

Biodiversity threats Many controversial development plans in Hong Kong raise environmental protection issues. The biggest is Lantau Tomorrow Vision, a huge infrastructure project that will create 17 square kilometres of artificial land off Lantau Island. The aim is to house up to 1.1m people.10 Critics say the project is unnecessary, expensive and threatens biodiversity, including pink dolphins and over 35 coral species.11 It will also require near-shore reclamation and a cross-sea transport network linking the islands to Lantau, Tuen Mun and Hong Kong Island.

Waste and recycling Data shows that each person in Hong Kong generated 1.49kg of trash a day and over 70% of all municipal solid waste was sent to landfills in 2019.12 The latest waste blueprint announced in February 2021 set the goal of reducing trash by 40- 45% per capita and achieving a recycling rate of 55%.13 A long-delayed plan to charge residents for the collection of trash may come to fruition this year.

What more can be done? The news is not all bad. Environmental education is taking effect, even if it is fragmented. Waste, including household garbage, and excessive use of electricity are decried and the polluting effect of private cars is widely criticized. People are flying less as well – at least for now – and most people are aware of simple steps such as eating lessmeat and recycling more.

Achievements include a major clean-up of sewage and industrial wastewater generated since the 1980s. Then, 50% went straight into the sea, close to shore, with no treatment of any kind. Today, a network of underground sewage pipes channels 93% of the territory’s effluent to Stonecutter’s Island for treatment.14

With a zero-waste, climate-friendly culture as the goal, young people are acting as models. Through education, social media, science and technology, they are stepping up and speaking out. They know that action is needed even if it is not always clear what action to take. If given a voice with policy-makers, they will drive change.

At the Federation, we stand firm with young people taking action to protect our city’s environment. We do so in schools, in outdoor camps, through leadership courses and train-the-trainer projects. By opening up more opportunities for committed youth to raise awareness, and by supporting their participation in efforts to address climate change, we hope to encourage them to show the way forward, both for the older generation and for the generations that follow. They have an enormous task and their energy and enthusiasm are inspiring.